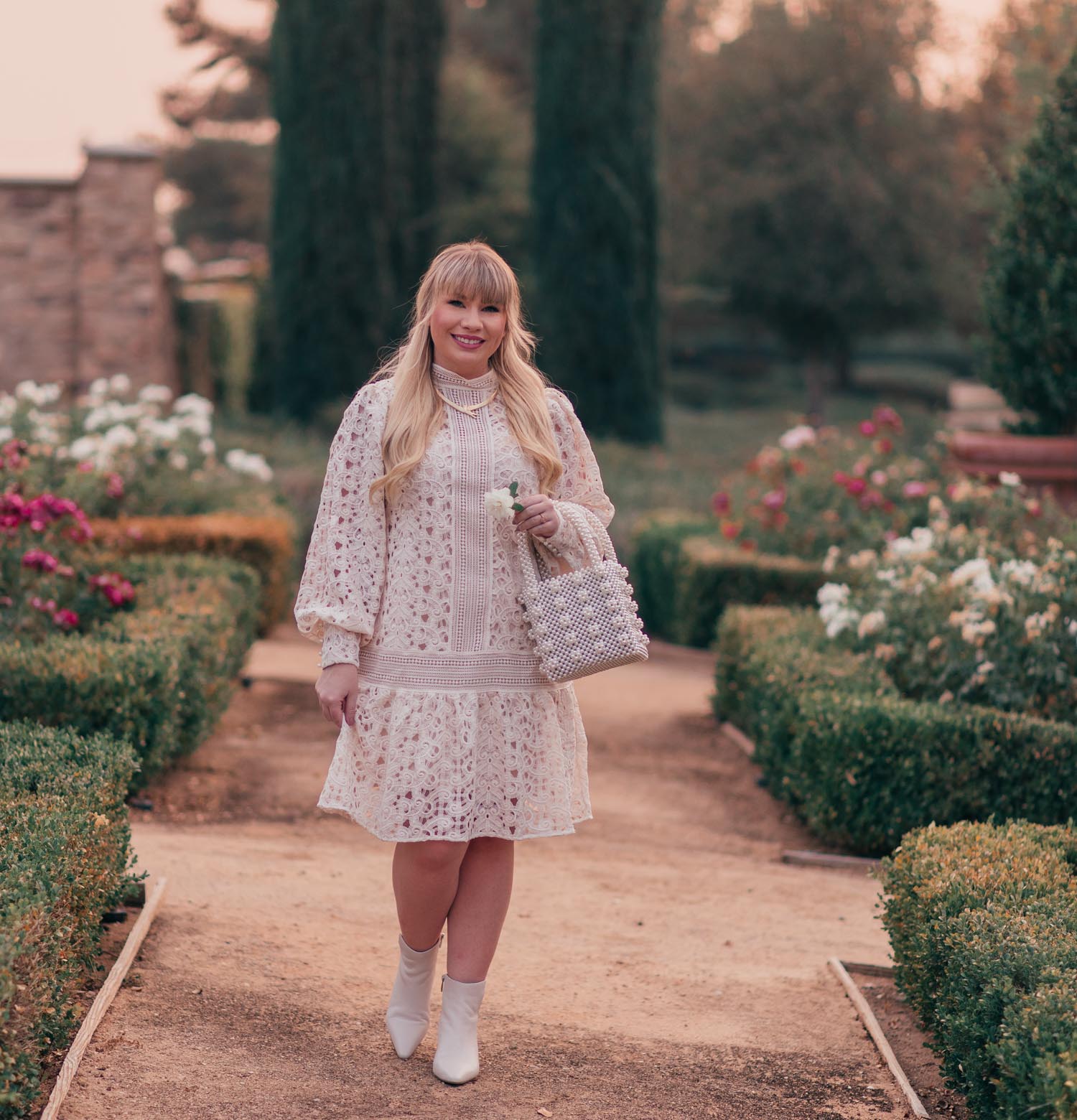 Today I am in… Lake Tahoe!!! It was been a long, long time since I’ve been anywhere and I’m so happy to finally be out of my apartment. Read on to see what I’ve been up to along with the details on this feminine white monochrome outfit! 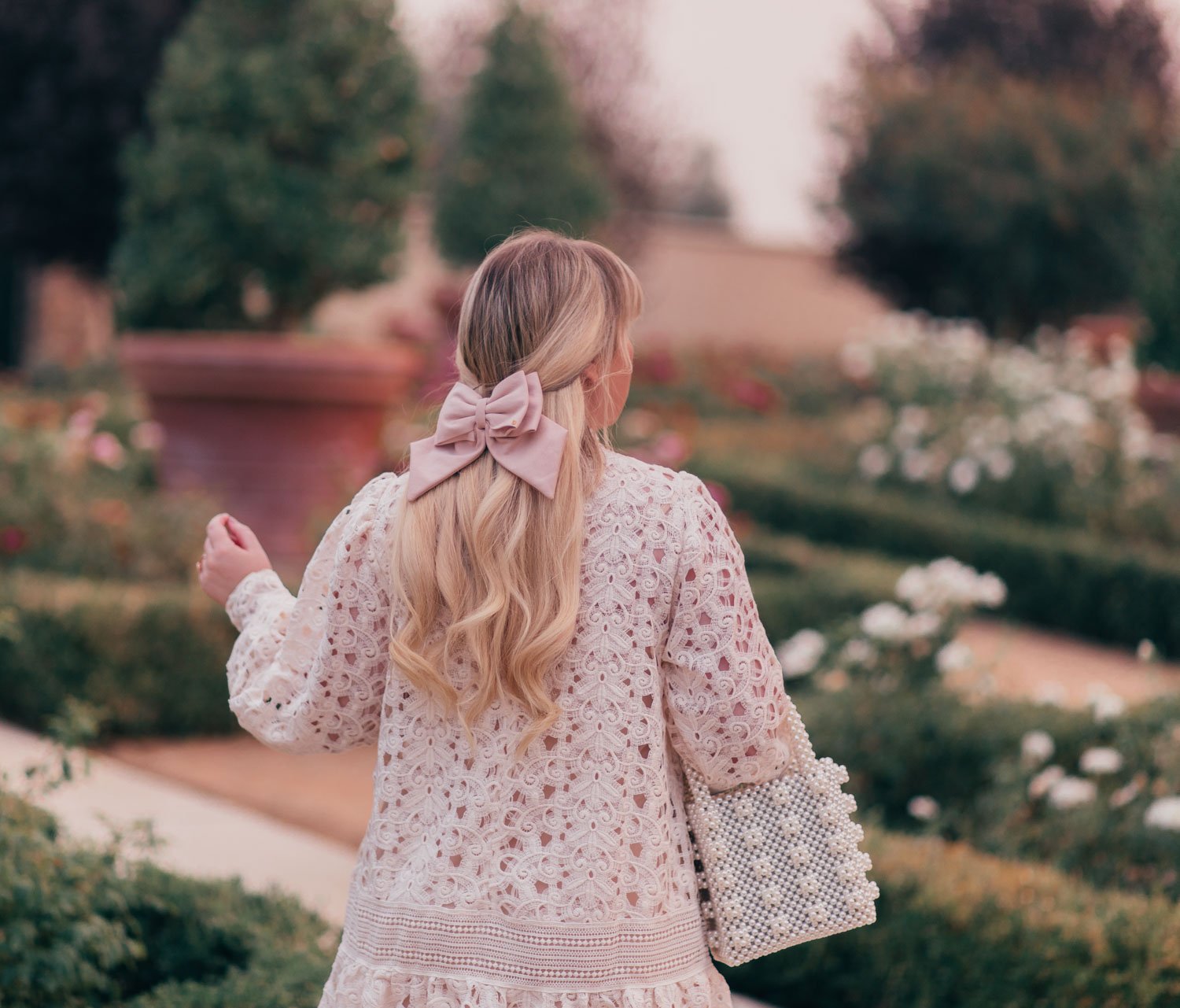 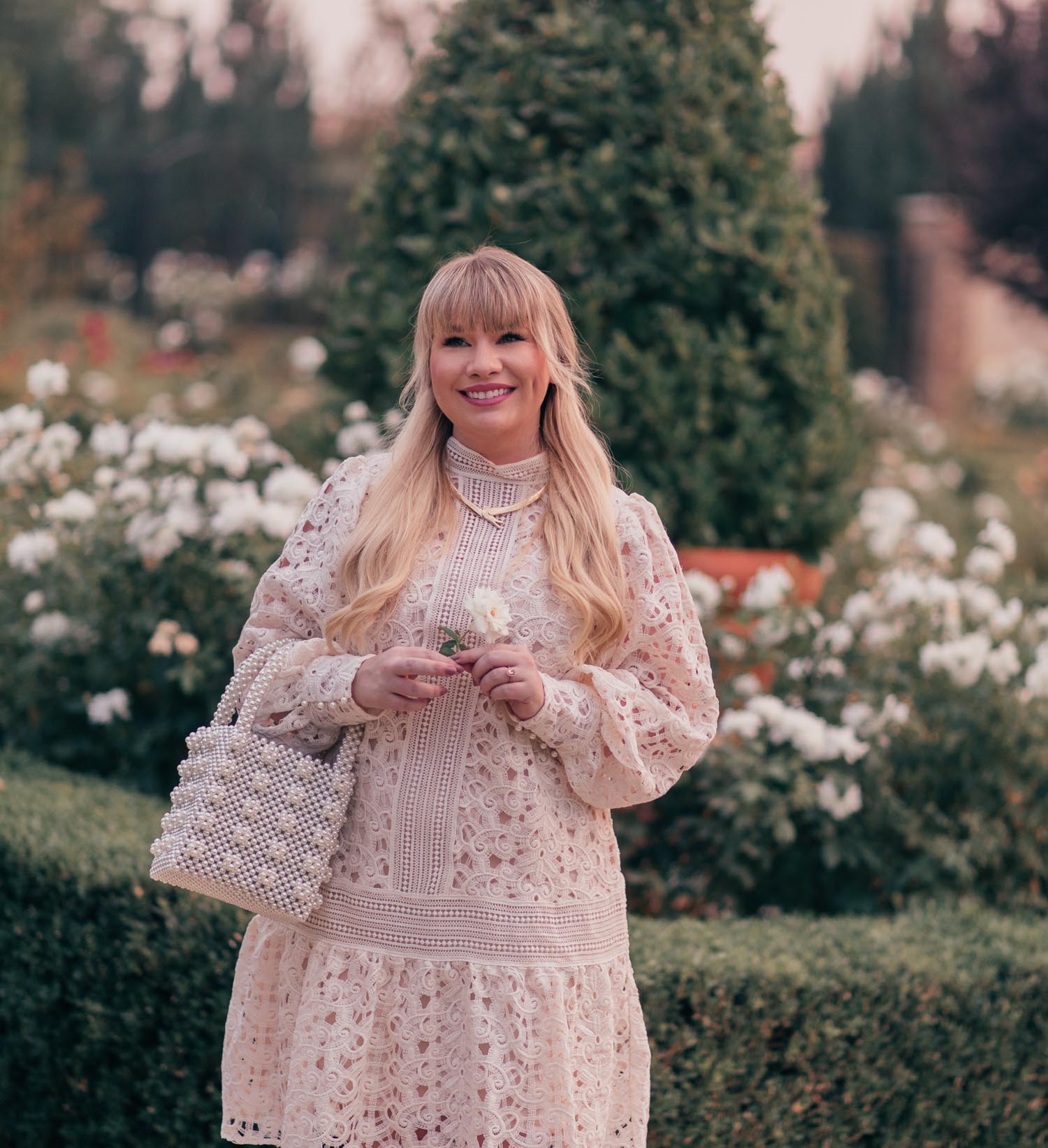 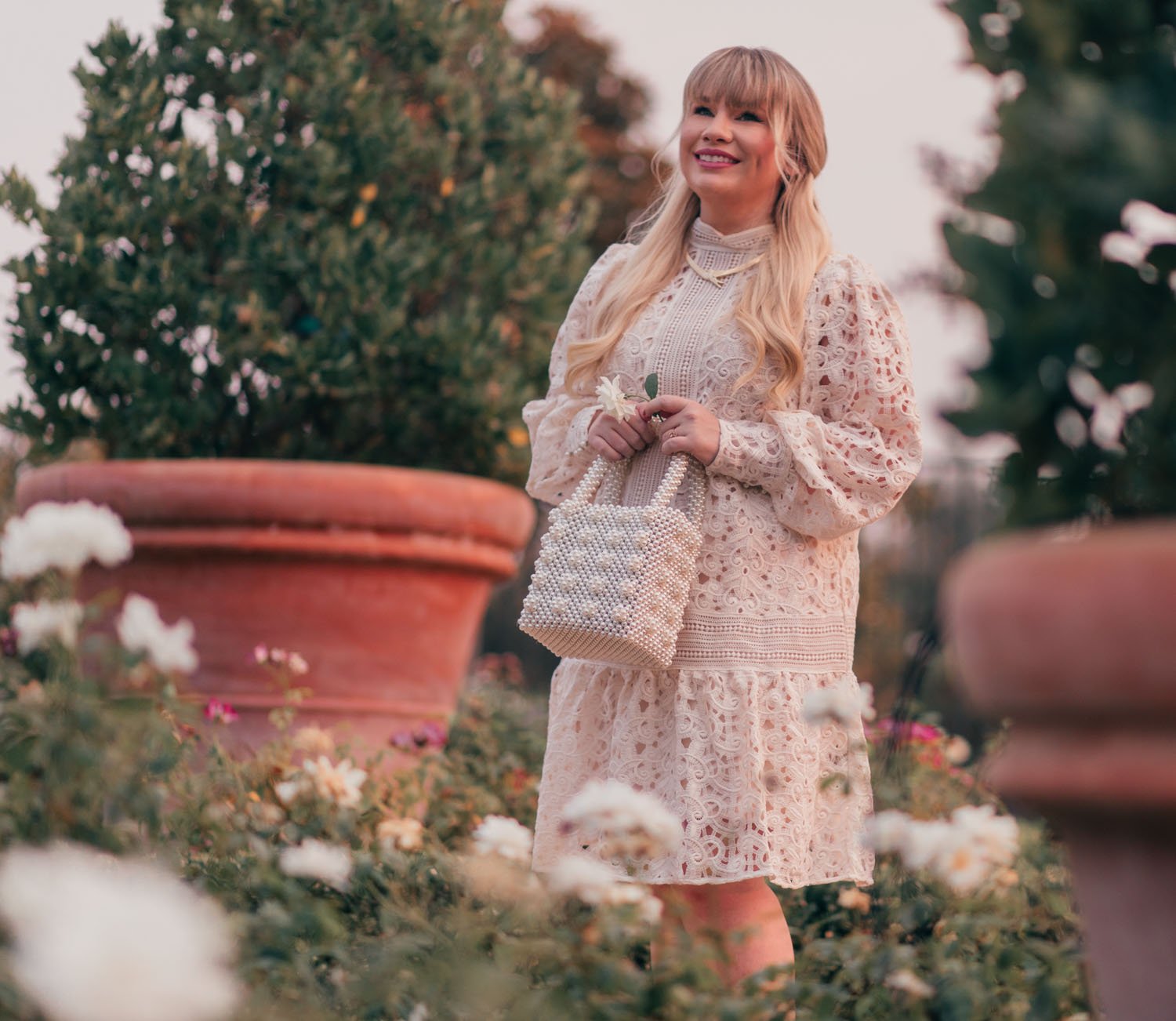 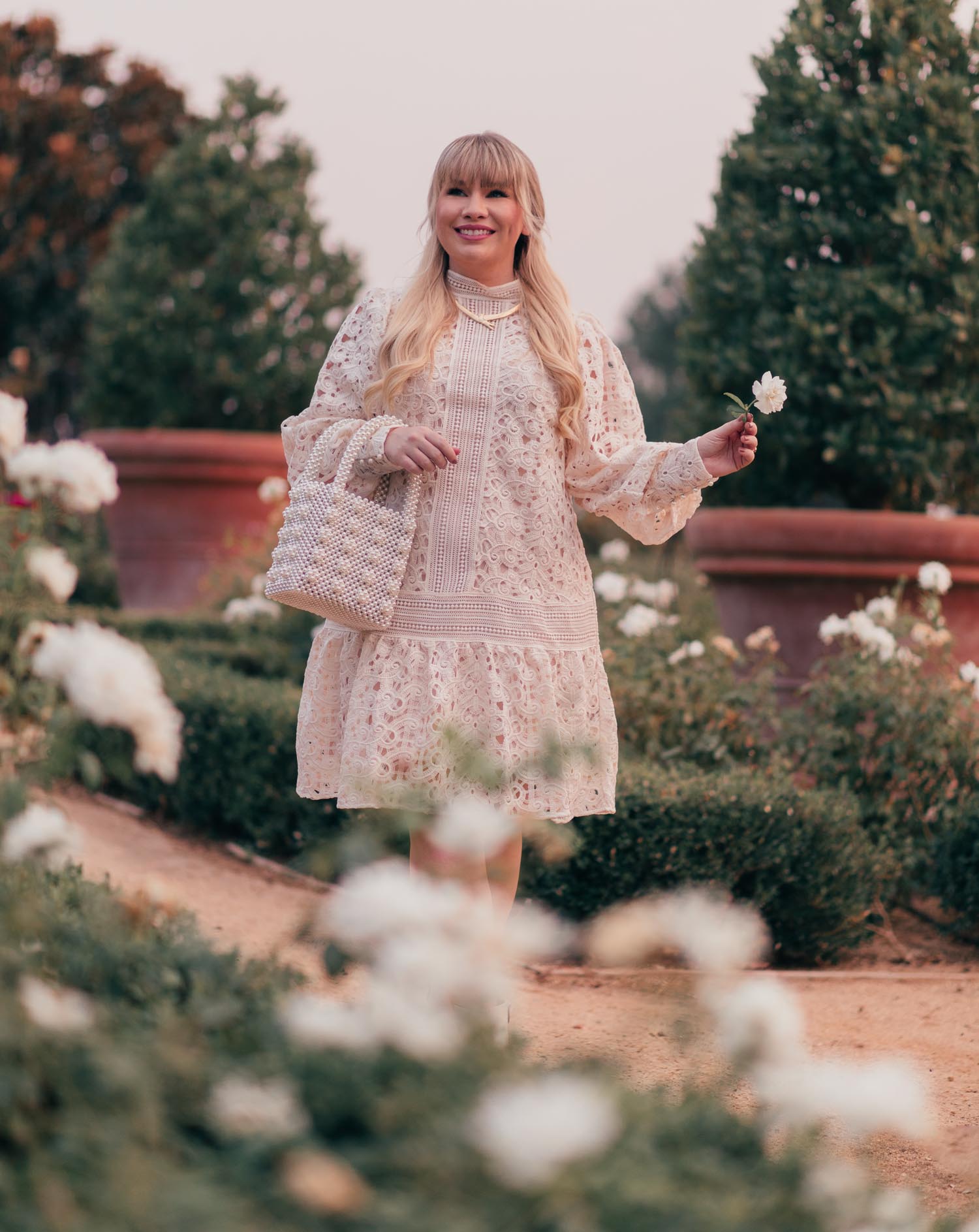 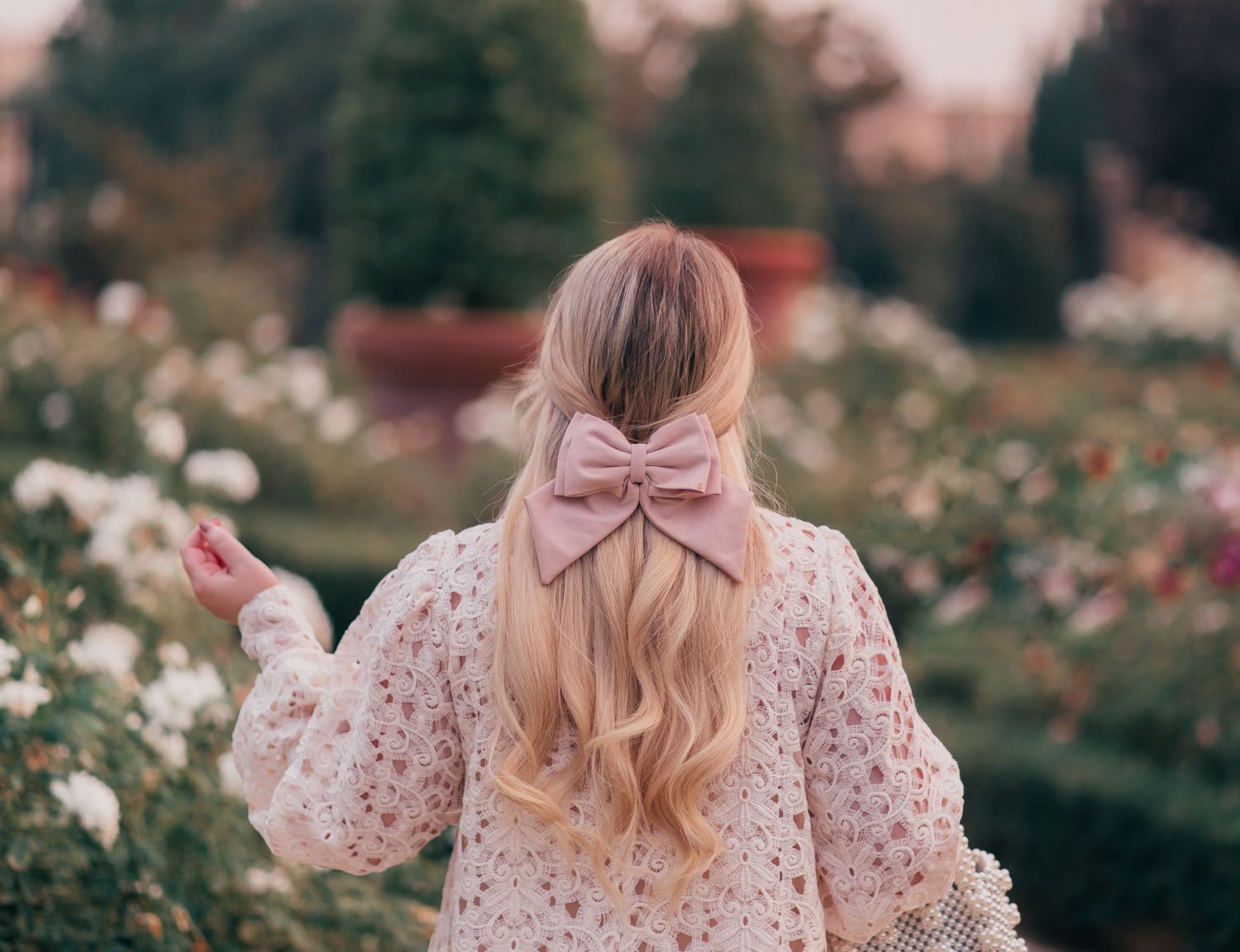 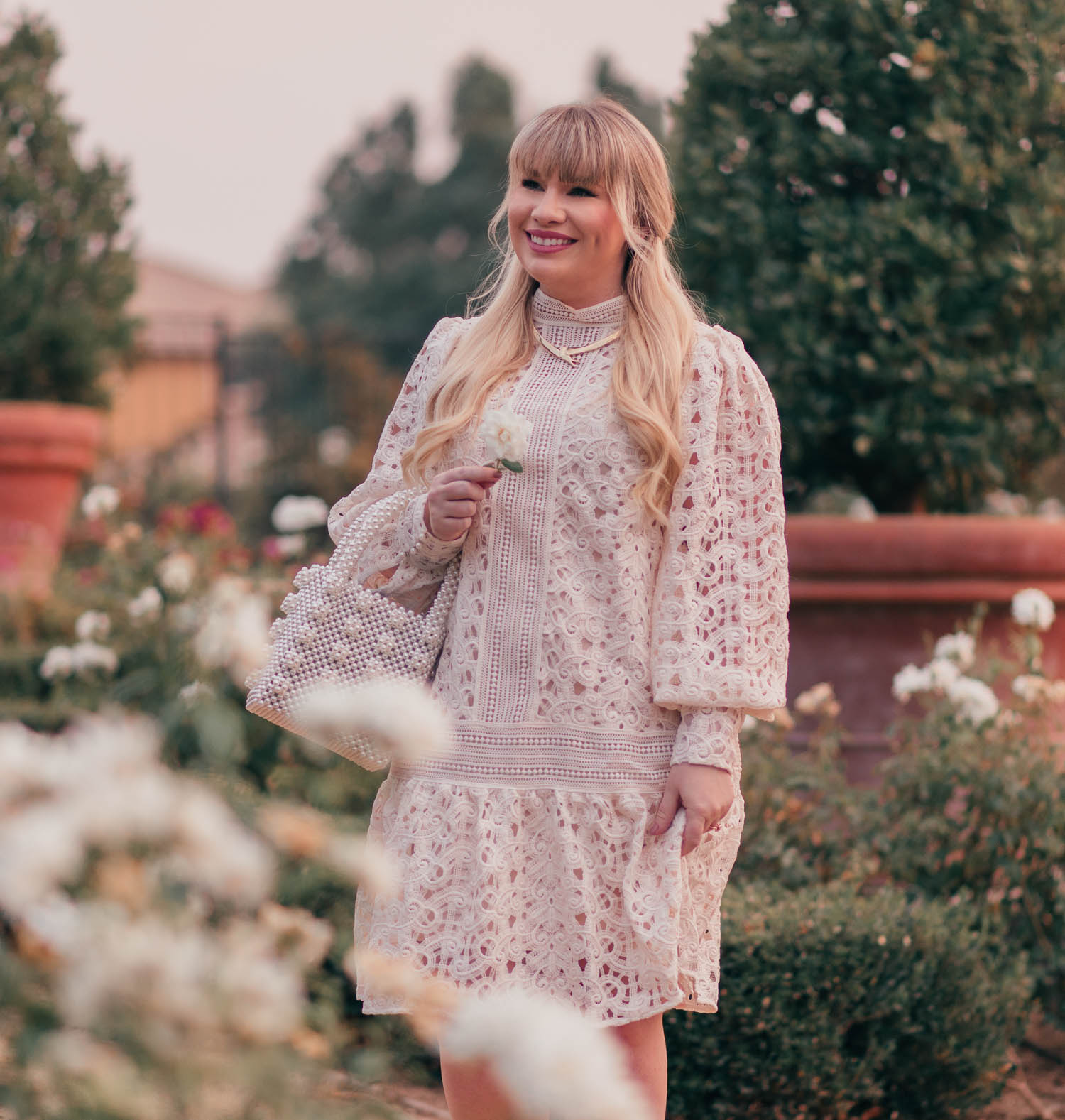 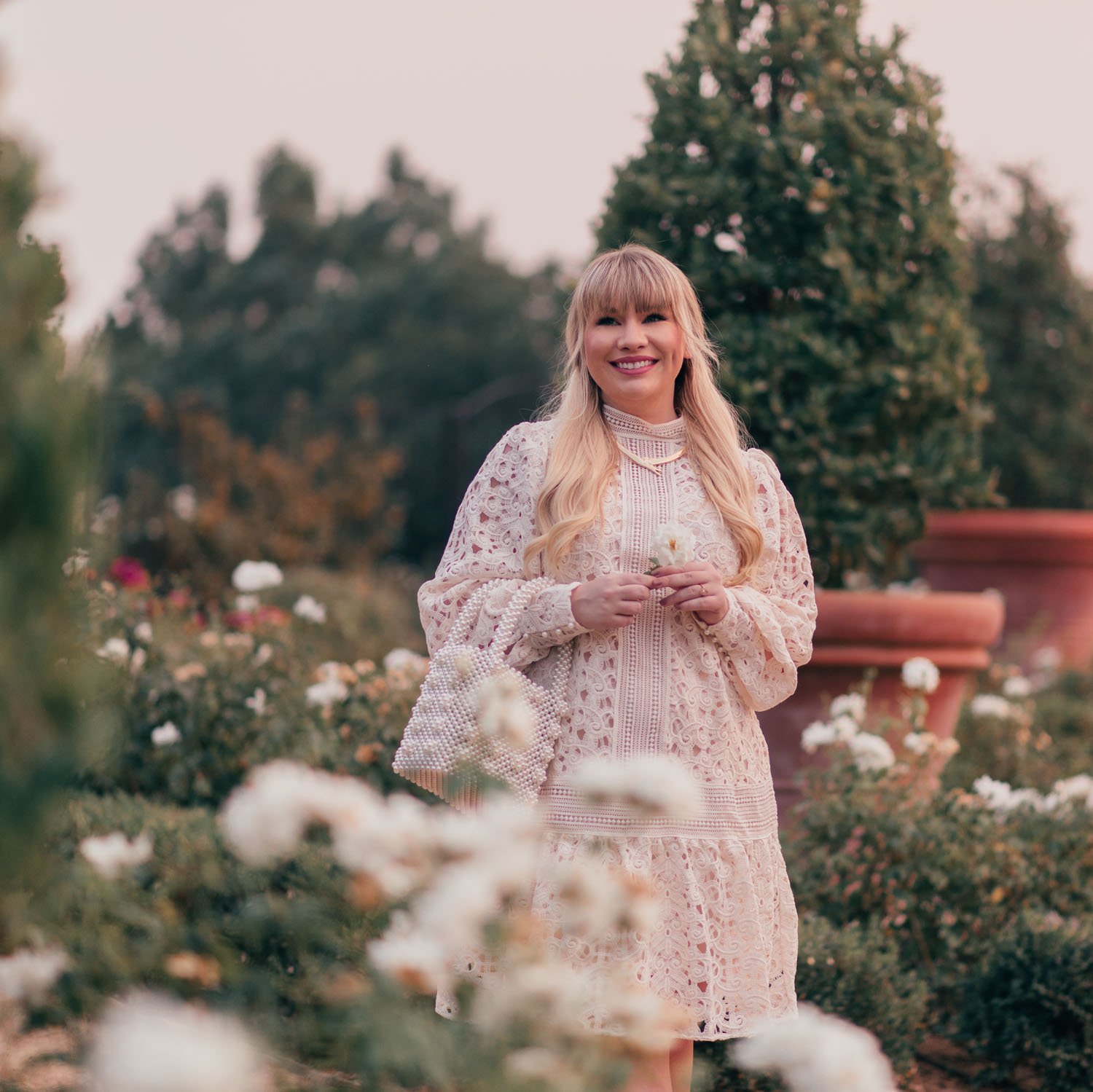 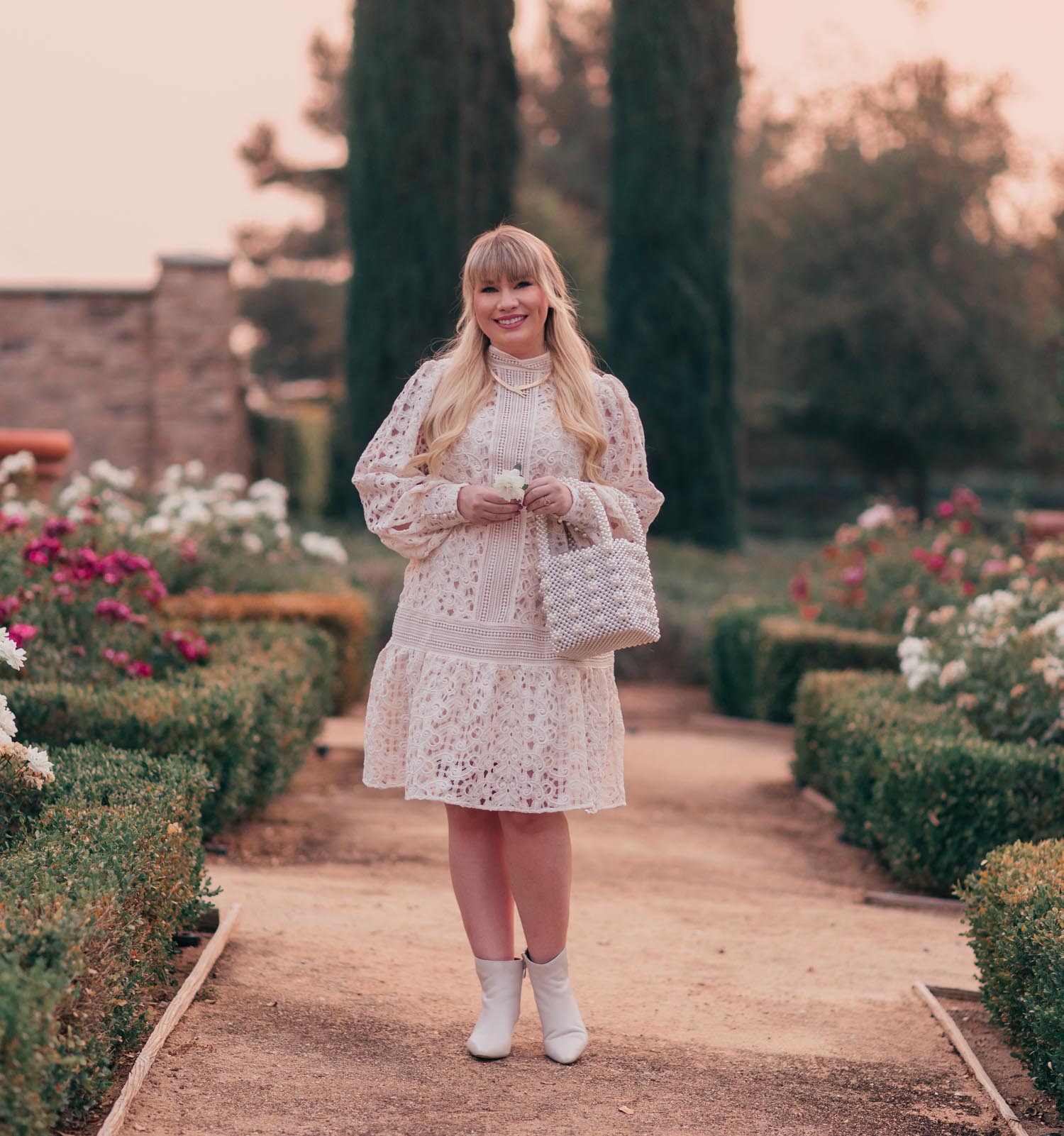 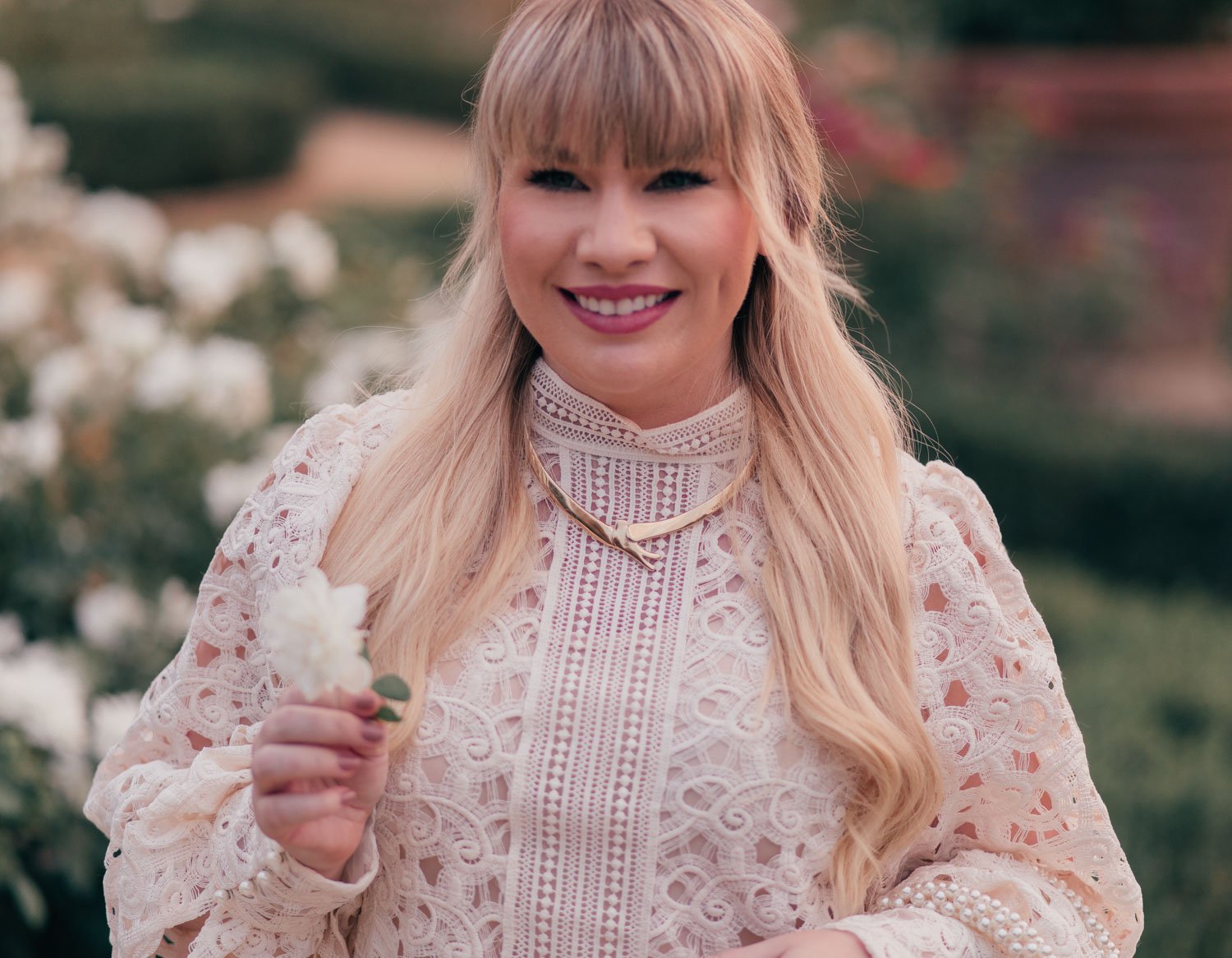 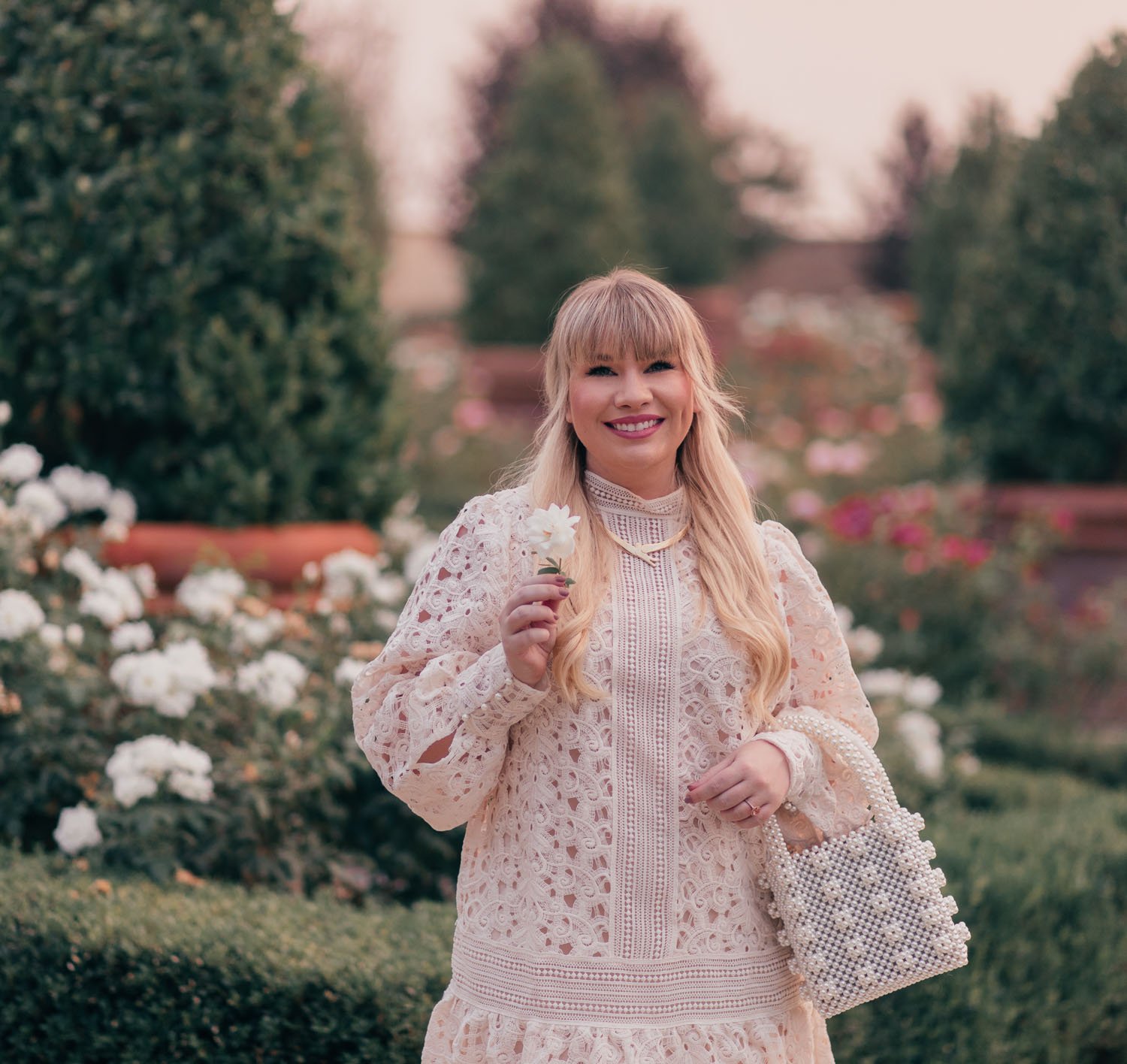 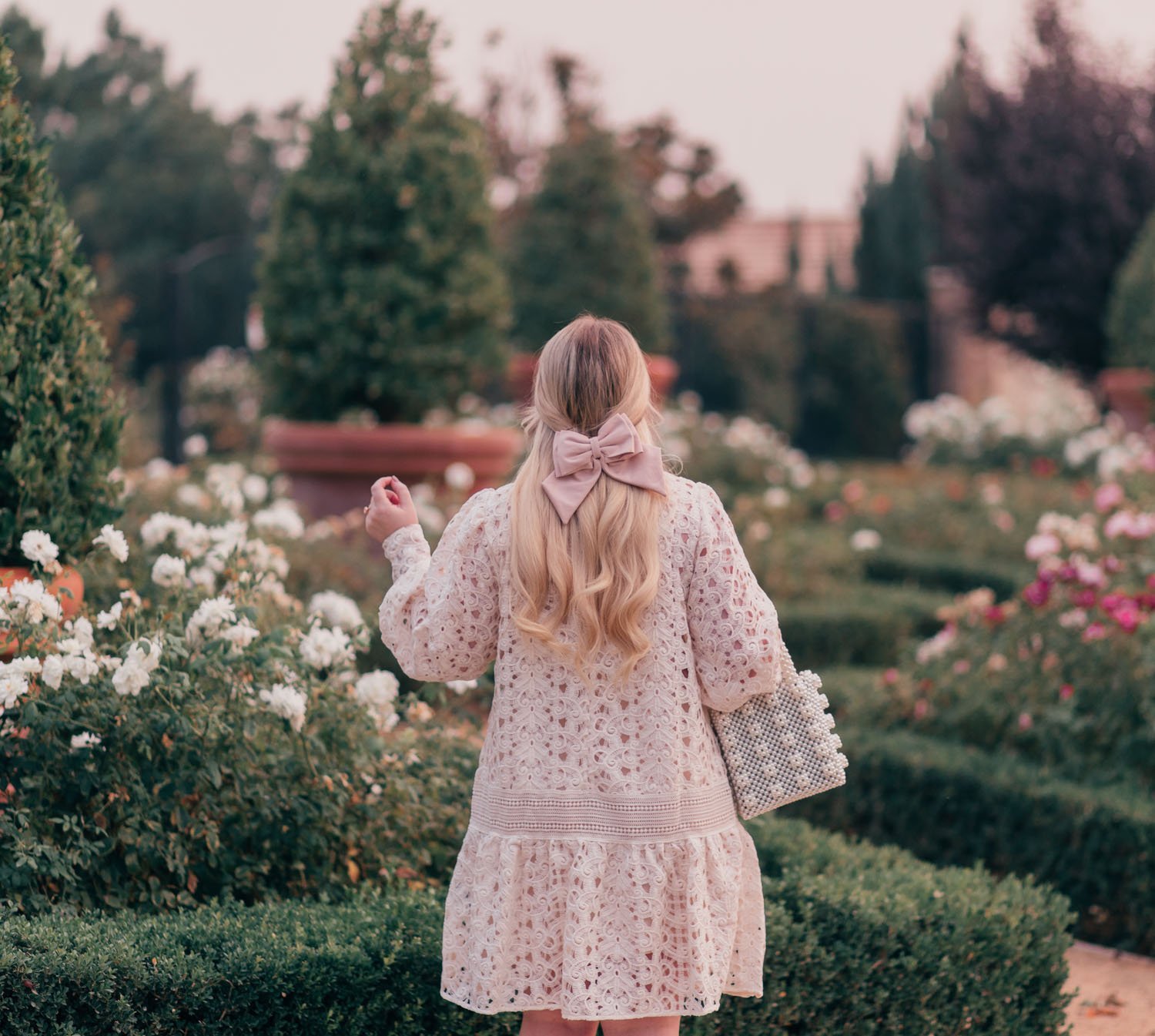 First things first, let’s chat about this outfit! When I saw this dress, I was smitten! The thing about shift dresses is that I usually have to go up a size to accommodate my hips. In this dress, I probably could have gotten my regular size and been fine. I do find it a bit overwhelming but it’s nothing a belt can’t fix 😉 Regardless, I loved the fabric and the fact that it’s made with recycled materials! I added a pair of white boots, a pearl handbag, blush pink bow and gold necklace to finish off the look and create a feminine white monochrome outfit!

I feel like it’s been a while since I’ve done any life updates… aside from my Month in Review posts, of course! The current situation in California is… unchanged for the most part but getting better so that’s good. I’ve heard that a lot of other states have reopened and we never actually did so I’ve literally been confined to my apartment for the last seven months (aside from the weekend drives around town so I don’t go crazy!).

Back in March, we would take walks every evening but then as the flowers started to bloom, my allergies just went crazy. They were so bad that I had to stay indoors because I was getting really sick. Even when I went out on the balcony to water my plants or walked to my car, I had to wear a mask otherwise I would have been sick for the rest of the day. I developed allergies when I moved to my current city over a decade ago so I’m used to it and take medication everyday but this is the worst they’ve ever been and nothing worked aside from staying inside. Then, summer came and it was a million degrees outside. It’s gets up to 110+ so yeah… not a fun time haha! And then, I broke my toes and it took two and a half months to heal. I was finally able to actually hobble down our stairs after about 8 weeks or so. Because of this, I literally did not leave the apartment for two months… my husband had to do all the grocery shopping, errands, etc. Then, the whole state caught on fire and it was dangerous to even breath the air outside. Luckily, we didn’t have many fires actually near us BUT I live in a valley that traps air so not only do we have the worst air pollution in the country year round but this trapped a lot of the smoke from the hundreds of fires across the state. Just to give you an idea of how bad it was, we were told that being outside even just for 10 minutes was equivalent to smoking 20 packs of cigarettes. I remember that there was one day when the air quality was around 650-700…. the AQI only goes up to 500 so this is considered extremely hazardous. We went over 6 weeks without seeing a blue sky and every time I went outside, I coughed and choked. There is still lingering smoke but for the most part, it’s much, much better!

I hope you don’t think I’m being a negative Nancy or anything lol! Just putting into perspective how bad it was and why I was indoors for a great deal of the time. It was a lot to handle after a rough few months of grieving multiple deaths and even as a positive and happy person, I could feel myself slipping into a slight depression which is very uncharacteristic of me and, thankfully, something that I noticed right away.

This brings me to this trip because I know that traveling is a hot topic right now. While California is still in lockdown mode, some places are more open than others. I just happen to live in one of the more strict counties but we are traveling to one that is not nearly as strict. With that being said, we are taking precautions – bringing masks, planning open air outdoor activities and staying together in a more isolated part of the area. If it were not for my little brother, we would not be traveling at all. Recently, he made the decision to join the Navy (something I was not so keen on initially) and he ships out in a few months. He requested to visit Tahoe one more time before he left and well, it starts snowing in early November so our options were limited as this was a very last minute thing. I have seen him maybe once in the last seven months and we talked together about his decision with our masks on. It’s such a crazy world we live in.

Anyway, I am very excited to spend this time with my family (mom, brother, and hubby). After the year we’ve all had and being stuck inside for so long, I have never looked forward to something so much in my life! I have needed a break for such a long time. The last month has been completely overwhelming to the point where I was on the verge of tears from being so tired. This is just what I need 🙂 I’ll be back on Monday but until then, feel free to follow along on IG stories! Perhaps, I should also do a vlog for YouTube? Let me know!

OH! And speaking of trip, a location, timeframe and itinerary have been chosen and you guys are going to flip! I am so SO excited!! Once it’s finalized with the travel agency, then I will officially announce all the details. Stay tuned 😀

Also, if you missed yesterday’s YouTube video, feel free to watch below. In the spirit of halloween, I’m sharing my true ghost story about the time I stayed in a haunted AirBNB during NYFW! I’ve never shared this before 😀 Hope you enjoy!

You are invited to the Inlinkz link party!